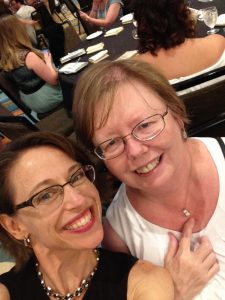 The upside is that we rarely have to put on actual pants (as defined by zippers & buttons rather than elastic & drawstrings). We also get to spend a lot of time having imaginary conversations with fictional people, which is awesome, because *revisions*. I’ve heard there are people who can convey their thoughts to other humans in complete sentences in real time, but I am not one of them. I’m a word salad girl all the way, so there’s something deeply satisfying about polishing dialogue until it’s a witty, charming rat-a-tat-tat exchange that actually makes sense. 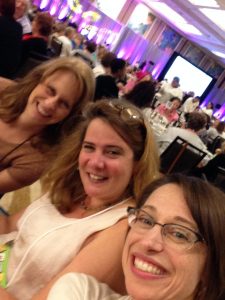 The downside to all this luxurious alone time?

It’s lonely. And (true story) you can get so good at lonely that you sometimes forget you *are* lonely, so you stay there until you get so weird that lonely is your only option.

This sounds grim, I know, but stay with me. There’s a solution.

Writer friends totally get it. They know where you are because they live there, too. They speak your language. They reach into the black hole of your alone time & drag you into the sun. Mostly they do it via the internet (nobody can text/tweet/instagram/FB/whathaveyou like writers) but sometimes…occasionally…they arrive IN PERSON. 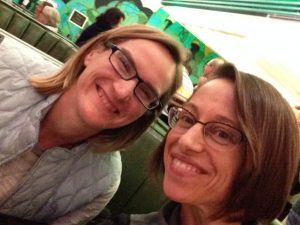 And then the world is good and perfect and light and you talk non-stop until your husbands retreat to some high-profile sporting event so they can sit silently side-by-side, grunting at the field, drinking beer & avoiding both eye contact and verbal interaction. Because they’ve had enough of us & the words. (So many words. ALL THE WORDS.)

So as I look down the barrel of Thanksgiving (good gravy, people, it’s next week!), I’m pausing for a moment to give thanks for my squad. Particularly for the incomparable Inara Scott, who got on a plane & braved actual snow (!) because she loves me.

And because I love her, I put on pants.

And because our husbands love us, they went to a football game.

This site uses Akismet to reduce spam. Learn how your comment data is processed.