They say there are two things you never want to see being made — laws and sausage. I would respectfully request that we add books to the list.  And why?  Because we writers are shameless thieves.  We’d rather you didn’t know that, though.  We’d rather you just believed in the magic of our imaginations.

The sad truth is, we don’t make much up.  We don’t have to.  We’re inveterate eavesdroppers, ruthless carpetbaggers.  We snatch our stories from random strangers’ cell phone conversations, from the car next to ours at a stoplight, or from the neighboring table over lunch.  We find these exquisite little details just lying there on the ground like abandoned mittens.  So of course we put them on & pretend they were ours to begin with.  The owners are long gone — who’s going to mind? 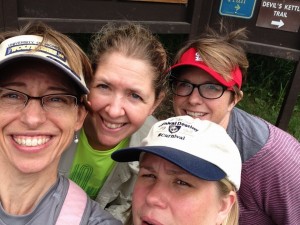 The WSoGR on the Devil’s Kettle Trail

Normally, I limit myself to co-opting nothing bigger than the proverbial lost mitten but for my latest release (PICTURE ME & YOU) I stole an entire waterfall.  Well, half of one, anyway.

Wait, I can explain.

See, I took a vacation a while back with a few of my girlfriends (who, due to a sauna incident I won’t get into here, are now known as The Women Scouts of Grand Marais.)  We were supposed to go canoeing in the Boundary Waters but the weather turned on us & we ended up exploring the North Shore of Lake Superior from the comfort of a cabin with hot running water instead.  (It was a very good call.) 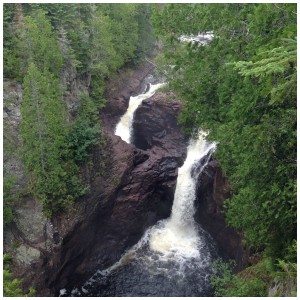 One steep, slippery hike later & sure enough, there it was — an actual disappearing waterfall.  We stood at the top of a cliff & watched the Brule River split itself into two waterfalls, one of which dropped over the cliff & headed happily for Lake Superior. But the other half — and this is half of a fairly sizable river, mind you — dropped into a hole in the ground and disappeared. 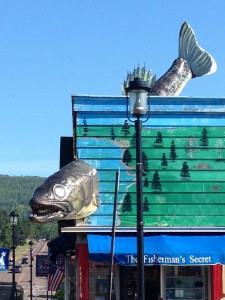 Not something you see every day

Seriously, it just disappeared into this pothole they call Devil’s Kettle. And nobody knows where it went.  Smart, scientific people have studied this phenomenon & have not gotten to the bottom of it.  Fully half of a big old river is just GONE.

There is no writer alive or dead who could resist.  I didn’t even try.  I stole the name & the waterfall (along with a giant papier mache fish from one nearby town & a pie shop from another) and created a new trilogy around them.

So there you have it.  I’m a thief. You’re welcome. 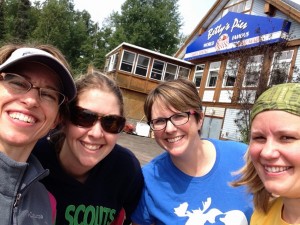 The WSofGR at Betty’s Pies.

This site uses Akismet to reduce spam. Learn how your comment data is processed.